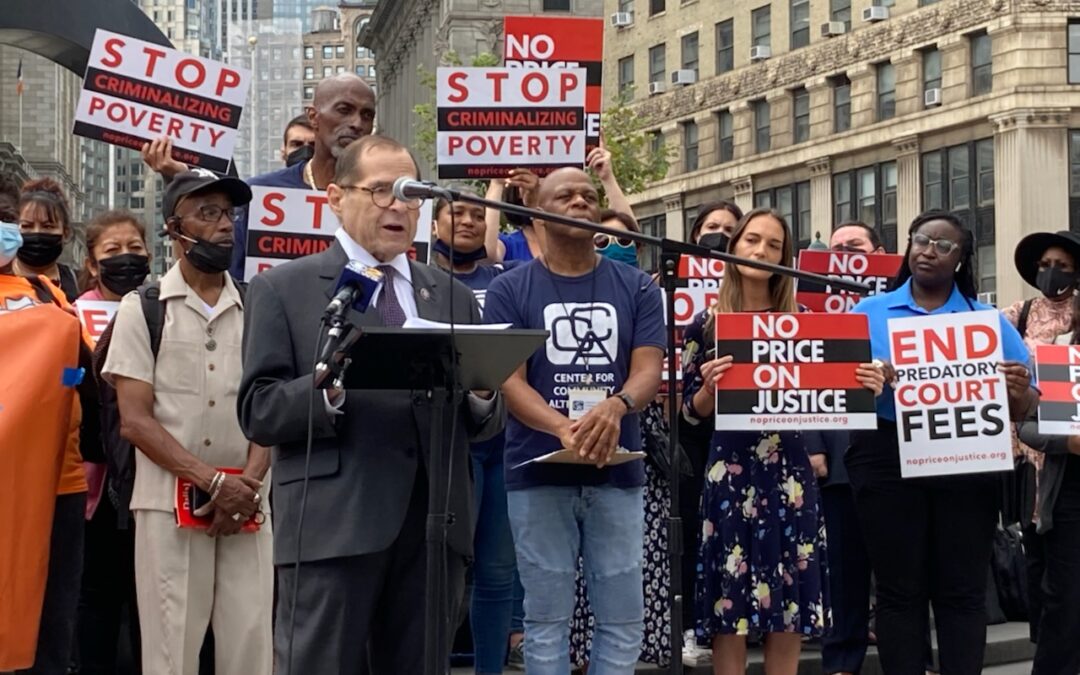 At the rally, New Yorkers demanded an end to the state’s dangerous reliance on court fees, a regressive revenue source that traps millions of low-income residents in a vicious cycle of debt and punishment. The lawyer representing a man who spent four days incarcerated on Rikers because he could not afford to pay fines and fees spoke alongside state lawmakers who recently visited Rikers Island.

National momentum for fines & fees reform is rapidly accelerating. This summer, Rep. Nadler convened a first-of-its-kind hearing on the harmful impacts of fines & fees and federal, state and local reform efforts. Last year California passed the most far-reaching fee elimination reforms to date, ending the collection of 23 fees charged to people in the criminal justice system — such as probation, parole, and local booking fees — and forgiving $16 billion in court debt.  And earlier this month, California’s legislature approved eliminating another 17 fees and discharging another $534 million in court debt.

“The increased reliance on fines and fees — regardless of someone’s ability to pay — diminishes public trust in our criminal justice system,” said Congressman Jerry Nadler. “It perpetuates the notion that equal justice under the law is accessible only to those who can pay for it. The End Predatory Court Fees Act would end this practice and bring much-needed fairness to New York’s criminal justice system.”

“Mandatory and excessive court fees are the ugly face of a justice system that offers one standard for the wealthy and another for the poor,” said Assemblymember Yuh-Line Niou, lead Assembly sponsor of the End Predatory Court Fees Act. “This is a system designed to criminalize poverty. To marginalize New Yorkers who can’t pay the arbitrary revenue-generating court fees baked into every step in our state’s legal process. New Yorkers deserve a justice system that works fairly for all — not just those who can afford to pay its endless surcharges.”

“The criminalization of poverty is pervasive throughout our criminal justice system, and it must be stopped,” said State Senator Julia Salazar, lead Senate sponsor of the End Predatory Court Fees Act. “We must pass the End Predatory Court Fees Act that will eliminate court, parole and probation fees and mandatory minimum fines that have exacerbated poverty and recidivism in New York.”

“Predatory court fines and fees punish low income communities that have disproportionately been impacted by the criminal legal system and by the pandemic,” said Lucas Sanchez, Deputy Director at New York Communities for Change. “It is obscene that people struggling to pay rent and buy food for their families have to worry about being incarcerated because they can’t pay an arbitrary fee. By eliminating these fees NY can bring urgently needed relief to thousands that have been excluded from rent relief and the excluded worker fund.”

“I was arrested and spent a night in jail because of a $90 unpaid probation fee from when I was 17 that I hadn’t even known existed,” said Melissa Taylor, member of Center for Community Alternatives. “It’s unconscionable that New York continues to criminalize low-income people, putting us at risk of arrest and incarceration in a futile attempt to try to raise revenue through the court system. Our legislature must take a stand against this injustice and pass the End Predatory Court Fees Act.”

“National momentum is growing in the fight to end court debt and the criminalization of poverty,” said Marvin Mayfield, Lead Statewide Organizer, Center for Community Alternatives. “Last year, California successfully passed legislation to eliminate court fees. This summer, U.S. Representative Jerry Nadler held hearings on the issue. Now is the time for New York to act. We call on our elected leaders to pass the End Predatory Court Fees Act and end vicious cycles of court debt and the criminalization of poverty.”

“New York imposes millions of dollars per year in fees on criminal defendants who can least afford to pay. This regressive tax punishes poverty, encourages policing for profit, and funds government services on the backs of Black and Latinx New Yorkers. Government revenue should not be extracted from New York’s poorest residents, and our courts must not function as debt collectors. State lawmakers must pass the End Predatory Court Fees Act without delay,” said Zachary Ahmad, policy counsel at the New York Civil Liberties Union.

“New York State’s reliance on predatory court fines and fees for revenue criminalizes poverty and extracts money from people who cannot afford it, creating a cycle of policing-for-profit and endangering lives,” said Jacqueline Gosdigian, Senior Policy Counsel at Brooklyn Defender Services. “Court fines and fees are an economic trap on New York’s Black and brown communities, forcing people to choose between necessities and paying off debt with the threat of arrest and incarceration hanging over people’s heads.  We call on the New York State legislature to urgently pass the End Predatory Court Fees Act this session to end this unjust practice.”