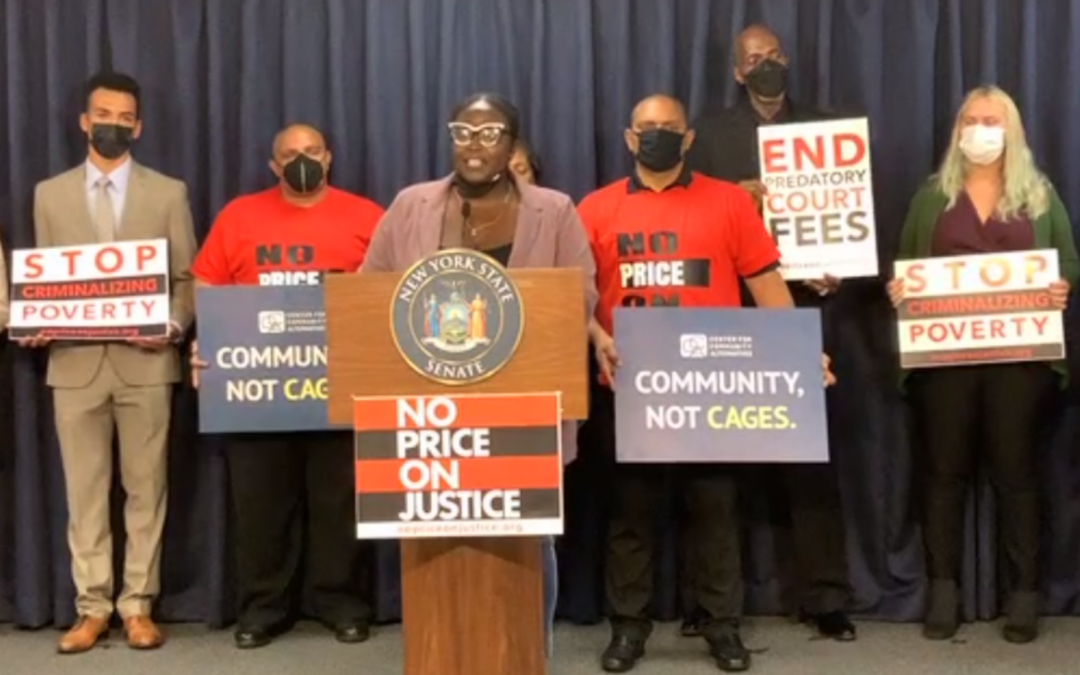 Ahead of a joint Senate Codes and Corrections Committee hearing today on the End Predatory Court Fees Act, directly impacted advocates, state lawmakers, and other key stakeholders held a rally at the State Capitol calling for the passage of this critical legislation. The End Predatory Court Fees Act would eliminate New York’s court, parole and probation fees, mandatory minimum fines, incarceration on the basis of unpaid fines and fees, and garnishment of commissary accounts.

At the rally, legislators and advocates demanded an end to the state’s dangerous reliance on court fees, a regressive revenue source that traps millions of low-income residents in a vicious cycle of debt and punishment.

National momentum for fines & fees reform is rapidly accelerating. This summer, House Judiciary Chairman U.S. Rep. Jerry Nadler convened a first-of-its-kind hearing on the harmful impacts of fines & fees and federal, state and local reform efforts. Last year, California passed the most far-reaching fee elimination reforms to date, ending the collection of 23 fees charged to people in the criminal justice system — such as probation, parole, and local booking fees — and forgiving $16 billion in court debt.  And earlier this month, California’s legislature approved eliminating another 17 fees and discharging another $534 million in court debt.

“Today we will hear directly from advocates that are dedicated to fighting for fairness and justice in the criminal legal system. I am proud to work with this movement and to have introduced this ground-breaking legislation in the NYS Senate” said State Senator Julia Salazar, sponsor of the End Predatory Court Fees Act and Chair of the Senate Corrections Committee. “This bill eliminates burdensome, discriminatory, and counter-productive mandatory court fees and surcharges from the legal system, requires judges to look at an individual’s financial circumstances before imposing a fine, and eliminates any possibility of incarceration, civil judgments, or unnecessary drains on limited family resources. These fees and surcharges are essentially another way of unfairly making poor people shoulder financial burdens that ought to be the responsibility of those with significant wealth. It is time to eliminate them, as there should not be a price on justice.”

“My son’s criminalization and my arrest has caused not just emotional hardship for my family, but financial strain as well,” said Peggy Herrera, community leader at Center for Community Alternatives. “The cumulative court fees and bail payments now total over $12,000, including court fees in excess of $200 for every conviction as well as youthful offender fees and fees for traffic violations. In March 2020, my charges were dropped. But my family remains criminalized through this unforgiving cycle of debt. Ultimately, these fees are an exploitative and regressive tax that criminalize poverty and put families like mine in an endless cycle of debt and punishment. That is why I am calling on New York legislators to end predatory court fees and incarceration for unpaid court debt.”

Brooklyn District Attorney Eric Gonzalez said, “Mandatory fines and fees disproportionately impact poor people of color, do not promote fairness or public safety and carry negative collateral consequences in people’s lives, such as civil judgements. I therefore support legislation that would eliminate court surcharges and fines that are automatically imposed upon criminal convictions, and thank the Legislature for paying attention to this important issue. Our legal system should be funded through normal fiscal channels and its costs must not be borne by those who are least able to afford them.”

“The End Predatory Court Fees Act, (S.3979C/A.2348B), would address these injustices by eliminating mandatory court surcharges, probation and parole fees, and the garnishing of commissary accounts to pay for fines and fees and surcharges,” said Alvin Bragg, Co-Director of the Racial Justice Project at New York Law School and Democratic nominee for Manhattan District Attorney. “It would also create a mechanism for judges to consider a person’s ability to pay before imposing a fine. Perhaps most significantly, this legislation would put a long overdue end to the draconian practice of incarceration for failure to pay a fine or a fee. All of these steps are key to ending the injustices that have helped to create two systems of justice, and will help move the criminal legal system to one in which there is one equal standard of justice for all. I am proud to support this bill.”

“New York imposes millions of dollars per year in fees on criminal defendants who can least afford to pay. This regressive tax punishes poverty, encourages policing for profit, and funds government services on the backs of Black and Latinx New Yorkers. Government revenue should not be extracted from New York’s poorest residents, and our courts must not function as debt collectors. State lawmakers must pass the End Predatory Court Fees Act without delay,” said Zachary Ahmad, Policy Counsel at the New York Civil Liberties Union.

“New York State’s reliance on predatory court fines and fees for revenue criminalizes poverty and extracts money from people who cannot afford it, creating a cycle of policing-for-profit and endangering lives. Court fines and fees are an economic trap for New York’s Black and brown communities, forcing people to choose between necessities and paying off debt with the looming threat of arrest and incarceration. We thank the Senate Codes Committee and the Senate Committee on Crime Victims, Crime, and Corrections for holding today’s hearing, and urge the New York State legislature to pass the End Predatory Court Fees Act this session to end this unjust practice,” said Jacqueline Gosdigian, Senior Policy Counsel, Brooklyn Defender Services.

“New York’s regressive fines and fees are trapping residents in a vicious cycle of poverty and punishment. When governments use predatory fines and fees to raise money, the result is a hidden, disproportionate tax on those who can least afford it,” said Antonya Jeffrey, New York State Director at the Fines and Fees Justice Center. “Today’s Senate hearing demonstrated the urgent need to end New York’s dangerous reliance on this toxic revenue source. We urge the New York state legislature to pass the End Predatory Court Fees Act immediately.”

“For New Yorkers living paycheck to paycheck, one court fee could mean having to choose between paying the fee and paying for life essentials such as rent and healthcare. And not paying the fee could mean going to jail, which may result in losing employment and housing. The possible consequences are not only severe, but frankly cruel. The current system of predatory fines and fees punishes indigent communities and criminalizes poverty. The End Predatory Court Fees Act is critical legislation that would address these systemic issues and prevent such harms from happening in the future,” said Emma Goodman, Attorney with the Special Litigation Unit of the Legal Aid Society’s Criminal Defense Practice.